The Times they Are a Changin’

The February meeting of Dynamo North East had a slightly fintech-y flavour when it was hosted at Sage HQ in Great Park (including some recent evidence of both divestiture and investment in the ‘beard quota’ around the table).

Sage’s Senior Architect Chris Latimer told members about the journey from a 3 person start up in 1981 to last year’s move to Business Cloud Software, a significant and transformative development for a company which spans 23 countries worldwide.  Whilst Sage has long been a globally recognised brand, their charitable and community work is less lauded – and we learned that, amongst other things, this amounts to more than 30,000 volunteer days a year. Impressive figures, even by Sage standards. 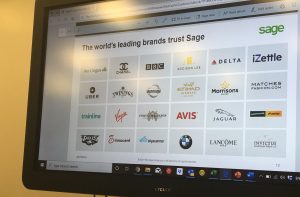 No sooner had we taken our heads out of the “cloud” than Andrew Besford presented his work documenting Dynamo’s mission and vision for 2020.  It was formulated in consultation with the Board and members to reflect the development needs of a fast-moving sector.  The “cluster” model is at the heart of creating value in member communities, and Sarah Thackray emphasised the need for the Board to become involved in steering the direction of these groups, and to populate the ‘Mission Matrix’ with those taking an active role.

Fintech Cluster Chair Stuart Lynn underlined the importance of not duplicating work being carried out elsewhere and urged Dynamo North East to continue building a transparent and open network that would encourage others across the region to “put their shoulder” behind it.

As verbal updates are kept to a minimum, there was a brief summary on: Cyberfest; work with the National Innovation Centre for Data; Digital Construction; Fintech and Service Delivery Centres. Alan Welby, representing the NELEP, commented on the bid for an Innovation Centre for Connected Construction (IC3), and there was discussion on the need – or otherwise – for a gaming cluster. The consensus being that the market was already served, and a Gaming Group would only confuse the landscape.

James Hall (Orange Bus, now known as Capita Consulting) mentioned the the BBC Tech Hub and offered to connect Dynamo to the relevant departments, should current comms need an update.

Charlie Hoult, Chair, then led a discussion on how Dynamo can help the North of Tyne (NoT) Combined Authority deliver the digital agenda, to which it has committed £10m – and outlined their three main priority areas. Dynamo now needs to consider in which of these three areas they could add their expertise:

Experience in these areas could be evidenced by the Dynamo impact report which is now at commissioning stage, and it would reinforce the narrative of a “joined up” digital sector. Whilst the £10m is allocated to NoT, it was agreed that development in certain areas would benefit the whole north east, and consideration should be given to wider adoption of an already successful “cluster” strategy as a tool for economic growth and digital development.  Alan Welby, who recently met with the Mayor, reiterated the importance of a “don’t duplicate” approach.

One of the Board expressed a view that whilst the overarching responsibility of the Local Authorities meant that they did not fully appreciate the economic potential of the tech sector, he was optimistic that they would work with those who did, i.e. Dynamo!

The recent appointment of Henry Kippin as Director of Economic Growth (NoT) was met positively, as Dr Kippin forms part of a team surrounding the Mayor, and Dynamo will look to engage with him as part of an ongoing process, as his portfolio includes “digital”. 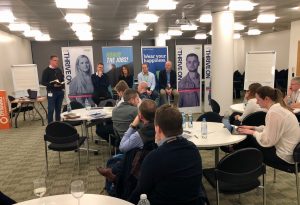 The meeting dispersed to make way for the “fintech” panel session (and to enjoy the impressive refreshments provided by Sage!) the key message was clear – Government are listening to northern voices, and we must make the most of the moment. 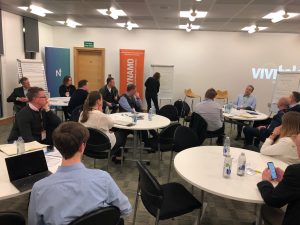 GLOBAL IT and business services consultancy CGI has partnered with regional tech network Dynamo to grow the north east’s health tech expertise. Health tech is a booming sector forecast to…

Date: Wednesday 9 September 2020 Time: 10:00am – 12:00pm   The International Centre for Connected Construction (IC3) would like to invite you to a collaborative workshop with experts from industry, public…

Newcastle City Council has announced a rescue package of more than half a million pounds to support the creative and digital sector in Newcastle. Funded by the North of Tyne…

RT @north_biz EVENT PARTNER OPPORTUNITIES With 700 attendees last year #CyberFest 20 is a great way to get your name in front of a key audience dynamonortheast.co.uk/wp-cont… pic.twitter.com/9PS5UVHpM7